We put food out in our courtyard for the birds because we enjoy watching them. I have large terra cotta saucers on the ground for the bigger birds (doves, blackbirds, grackles) and three window-mounted feeders for the little birds (finches). I don't feed hummingbirds because the neighbors do, although hummers do visit our flowering plants.

The smaller window-mounted feeders are new this season and it's really been fun watching the birds discover them. I have a feeder with nyger seed (thistle) for the finches on the window across the hall from my office, located so I can just look up through the arch and watch them. The other ones are mounted on hall windows where we can watch from our bed.

These feeders are stuck on with suction cups and are fairly small, much to the annoyance of the doves. The doves can't get into the feeders, which frustrates them no end. They sit on top and try to reach down and in to the food, but the feeder is too big for that to work. They try to fly into the feeder, but it's too small. The doves even try to hover outside the feeder, but they can only hover briefly and their wings smack into the feeder if they get too close. They don't even try to get the nyger seeds, maybe because it's so obviously impossible for them.

I don't think doves are very intelligent. These doves could be eating from the big terra cotta saucers on the ground without any problems at all, but there they are, flailing around the little feeders instead. A few of the grackles and blackbirds have made half-hearted attempts to get at the food in the feeders, but they give up quickly. The exercise pen around the saucers baffle the doves, too. They get very frustrated when they're on the outside, walking up and down the fence line trying to get through. The exercise pen is there to keep Gordo the Collie out, not the doves.

In fairness to the doves, they may be stupid, but there are a lot of them, so they're doing something right.

And roadrunners occasionally drop by, either for small birds or peanuts. I feel a little guilty about the former; the buffet isn't supposed to be that extensive. That's how nature works, though.

It's amazing how much pleasure we get from watching the birds. The bird seed isn't particularly expensive (I buy the no-waste feed from Amazon) and we get hours of enjoyment. Birds can be very funny, as when the finches are chasing the doves away. Right now we're seeing a lot of courting and mating behavior. It won't be long before we see parental behavior, bringing the young birds to the food and teaching them to eat.
Posted by Mary the Digital Knitter at 21:11 4 comments:

Gordo the Collie Does It Again

The night before last, Gordo the Collie got into the bird seed. This time he opened a 5.75-lb bag of Nyger seed, intended for the finches, and ate about half a pound. Nyger seed is very small, maybe a sixteenth of an inch in diameter and three-sixteenths of an inch in length. The seeds went through him really quickly yesterday, but he sure left a lot to be picked up. He's pretty much back to normal today.

Yes, I know it's really my fault for leaving the bag where he could get to it. He loves to open bags and boxes and I should have known that bag would be very tantalizing to him. The noise the seeds make when the bag moves would get his attention. It was a nice rattly plastic bag, too.

Gordo the Collie is almost three years old and I'm still having to puppy-proof the house. I blame this on the epilepsy and resultant brain damage. It doesn't matter if he's not perfect. I still love him just as much. I just have to quit forgetting my part of the job.
Posted by Mary the Digital Knitter at 16:53 2 comments:

It's really easy to make preserved lemons, which are from Morocco and are traditionally used in chicken tangines, or stews. You slice a lemon almost into quarters, leaving the four pieces attached at the stem end. Then you stuff kosher salt into the cuts, about a quarter-inch thick. Drop the lemon into the canning jar and cover it with lemon juice. It took four or five small lemons to make enough juice to cover two salted lemons, using one-pint wide mouth jars.

Then you let the jars sit in a cool place for a month and the preserved lemons are ready to use. You take the lemon out of the salty juice, rinse it off, and chop it fairly finely. Drop the rest of the lemon back into the jar for later. Use this anywhere you need a bright lemon taste. I put it in tuna salad, for example.
Posted by Mary the Digital Knitter at 18:07 1 comment:

Nature Red in Tooth and Claw

We had a dramatic bit of nature happen in our courtyard yesterday. A roadrunner killed a small bird and carried the body off. All that was left to show this had happened was a few spatters of blood and some feathers. The roadrunner came back three or four more times after that, probably looking for more prey. We think the roadrunner has a nest with chicks nearby.

This is the part of nature that Walt Disney didn't show in the nature shows. The hero character always escaped the predator. When we were on photo safari in Botswana, we saw a pride of lions pull down, kill, and eat a Cape buffalo. Only it wasn't quite in that order. It was more like pull down, eat, and kill. It was horrible to see and hear, but it was an important and regular part of nature. Predators kill, prey gets eaten. It's just that it usually doesn't happen right outside the sliding door.
Posted by Mary the Digital Knitter at 19:06 No comments:

Rainy Nights in the Desert

Our weather has been reminding me of that song about Camelot, where the rain may never fall 'til after sundown... The last two days have been just like that. It was cloudy on Thursday, but it didn't start to rain here until about 2200, well after dark. Friday had scattered clouds, mostly white and rainless until late afternoon. Again it didn't rain until well after dark. We got almost an inch of rain on Thursday night and a whole lot less on Friday. Then it was very cold Saturday night.

Gordo the Collie hates the rain. He doesn't like getting his feet wet at all and he's not at all fond of having drops of water fall out of the sky onto him. As a result, all of his expeditions outdoors on both nights were hard on both of us. He'd go out, take a few steps, and stand there for a while, then turn around and come back in, without doing what he'd gone out to do. So he'd come in, lie down, and then get up, go back out, on and on and on, thereby keeping me awake for hours. Fortunately, I think we won't have rain again for a while, so we can both get back to normal.
Posted by Mary the Digital Knitter at 20:27 1 comment: 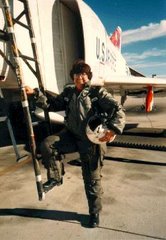